Last night the Grubby Mitts and Pete Um played at the Changing Spaces venue in Cambridge – an empty shop used for pop-up events and exhibitions. The event was organised with Aid&Abet and Bad Timing.

The Grubby Mitts are Andy Holden, Johnny Parry, Roger Illingworth, J.B MacDowell and John Blamey, with contributions from friends and musicians. The band are represented by their own label Lost Toys Records.

They describe their music as “post-MI!MS” (Maximum Irony Maximum Sincerity) referring to the artist’s manifesto signed by Andy and his friends which formed the subject of a show at the Zabludowicz Gallery in 2013.

“short loops, repeated phrases, post-everything, and non-hierarchical; a delicate balance of pessimism and optimism, irony and sincerity, electronics and melody, art and pop. The band perform with numerous objects, such as a marble, alongside a more traditional band line-up of guitars, drums, samplers, keyboards, and saxophone.”

The Politics of Friendship uses the rock-tour to explore the concept of friendship as the band play music they have performed and recorded together over the last seven years. Visiting artist-run spaces across the UK and adorning each location with posters, artwork and projections. A series of 9 posters were commissioned, 1 for each venue, with unique support acts invited for each show.

My first experience of the Grubby Mitts came from a performance at Andy Holden’s exhibition at Kettle’s Yard in 2011. I’ve followed Andy and the band since then, buying their records (as in my teens I followed Duran Duran and Frankie Goes to Hollywood) and joining Andy’s epic Last Stop for the Good Old Times bus tour of Bedford in November, part of the MI!MS show at the Zabludowicz Gallery.

Much of Andy’s work analyses the transition from childhood to adulthood (I think). His childhood and ours. He keeps his school friends with him and they are both the subject of, and contributors to, his/their work. He literally lists the things they hold in affection in the song “Pessimism of the Intellect, Optimism of the Will” a re-phrasing of “Maximum Irony, Maximum Sincerity”. The understanding that we simultaneously embrace and dismiss those interests, locations, friendships, ideas and memories of our youth. We like to remember but we also like to forget. We transition from innocent and open-minded childhood, through the black/white tribal thinking of adolescence, to the more complicated and self-conscious prejudices of adulthood. Once grown-up we try to recover the innocence and honesty of our youth but we can’t fully regress so we are at once nostalgic and forward-looking, sentimental and cynical.

It’s a fertile subject matter – which manifests itself in the Grubby Mitts’ music as melancholic ballads, teary-eyed drinking songs and odes to friendship. The music and projections incorporate sampled loops from old films, cartoons, children’s TV and teen-pop songs – I’m sure I can hear Windy Miller’s mill clunking at the end of “To a Friend’s House the Way is Never Long”. Childrens toys become percussion instruments and projections further add to the sense of flicking through a re-discovered photo album. But there are also more challenging, experimental, improvised and unpredictable pieces with loud guitars and keyboards, unusual percussion, freestyle jazz-like saxophones and repetitive phrases building a wall of sound.

The Grubby Mitts’ style is consequently hard to describe – nostalgic and progressive, familiar and experimental, sincere and ironic.

Pete Um is quite different. Squarepusher meets John Shuttleworth. Pete performed a mesmerising collection of often short tracks – more comments and observations set to beats than “songs”. He makes an amazing range of sounds, distorting his voice through a pair of microphones, backed by a synthesiser-sampler box … I’m not sure what it was he was playing but it sounded great.

This describes better than I can: “Pete Um: A master of the miniature electro-acoustic song-poem, a form he has more or less invented and crystallised himself, his work displays a sardonic wit combined with a healthy misanthropy in micro-collages of voice, instruments, samples, and electronics.” 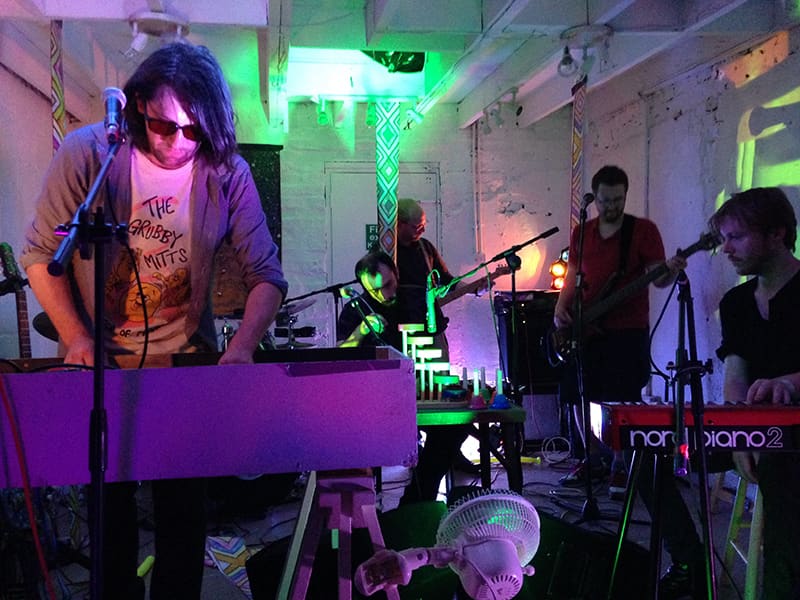 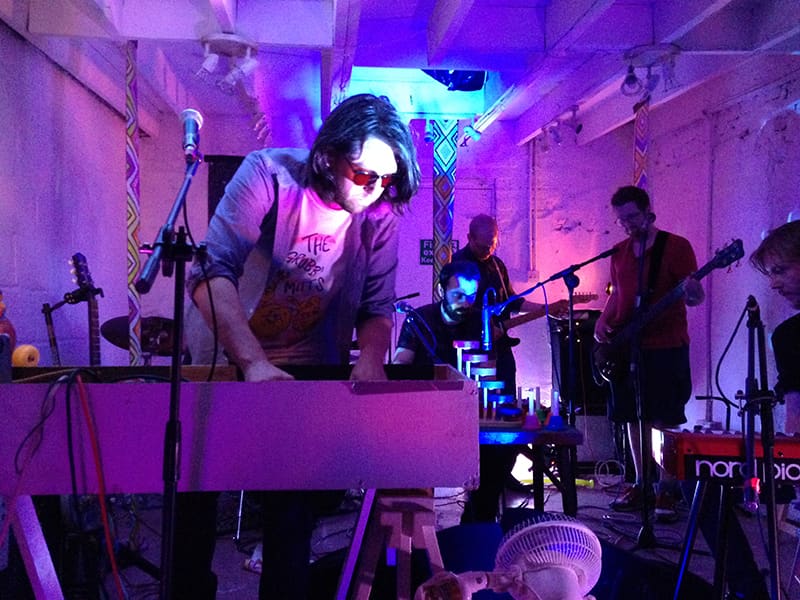 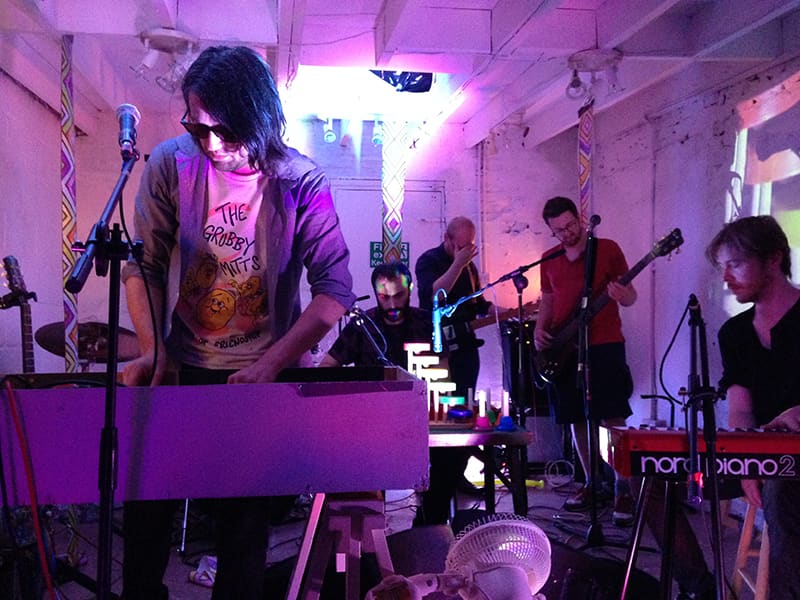 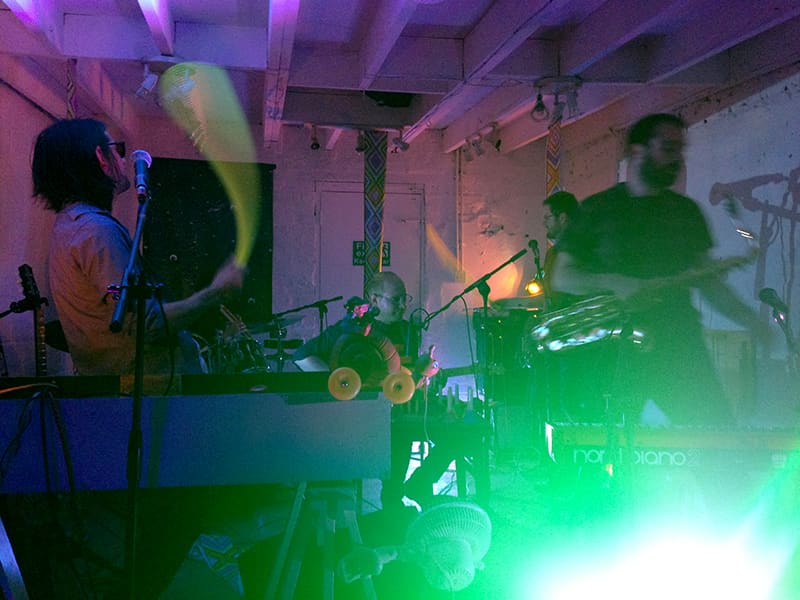 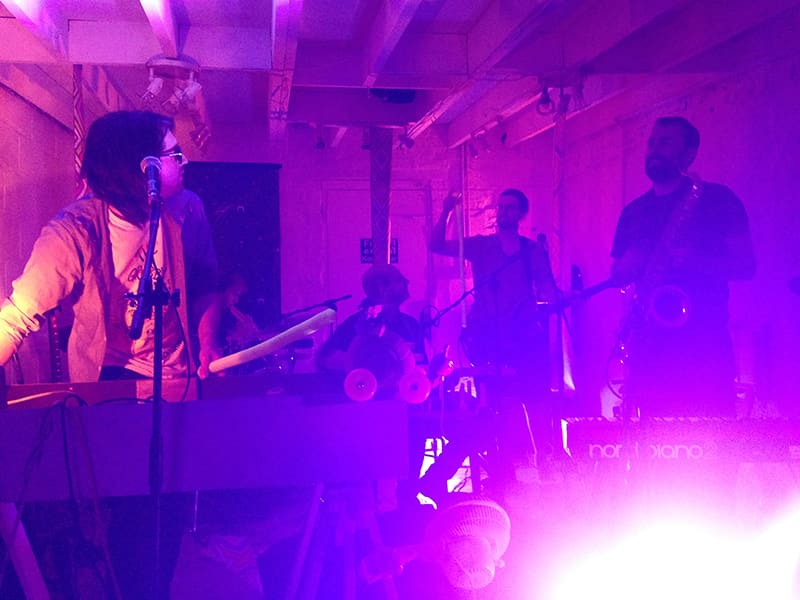 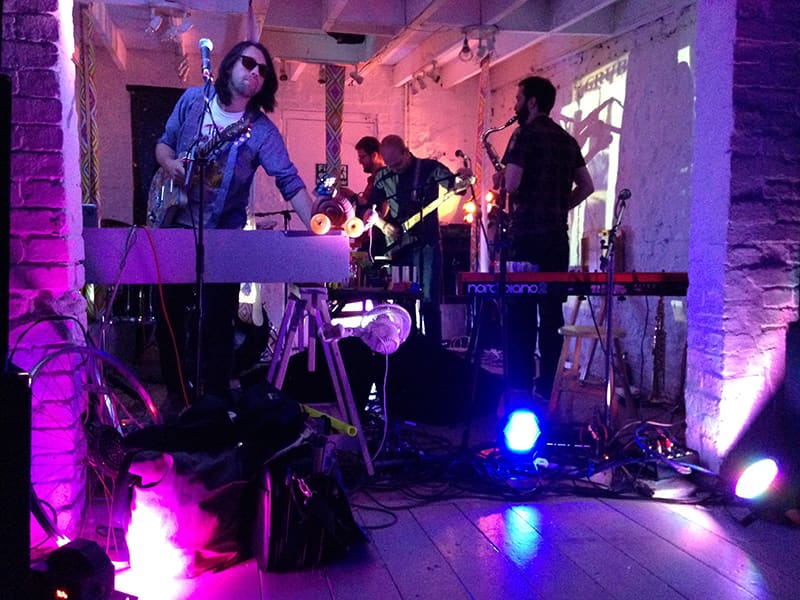 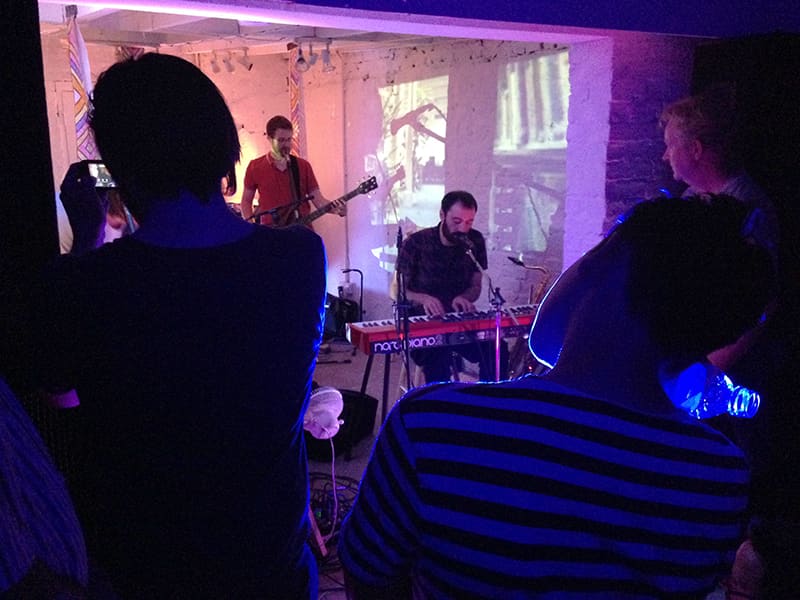 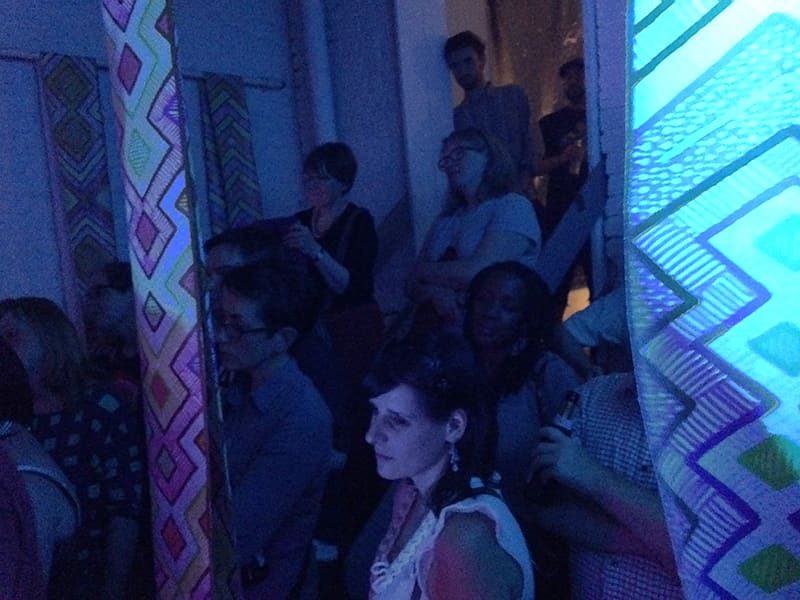 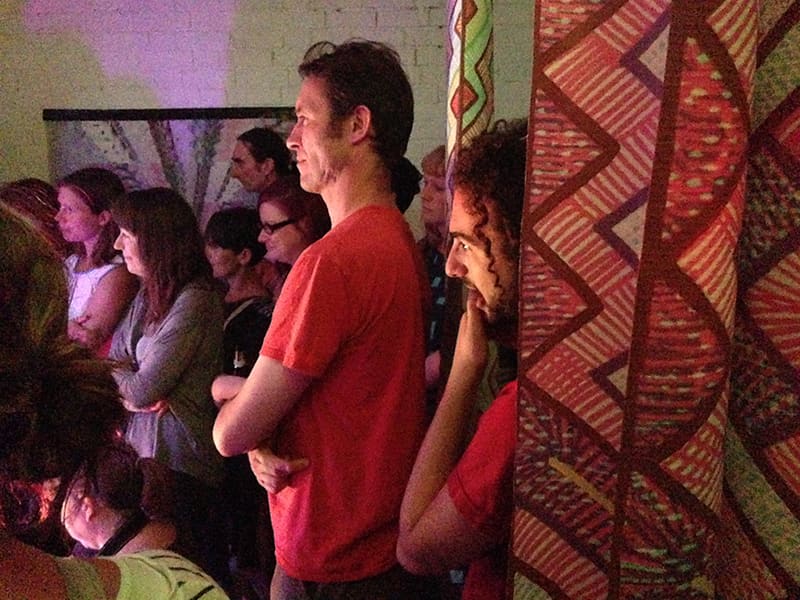 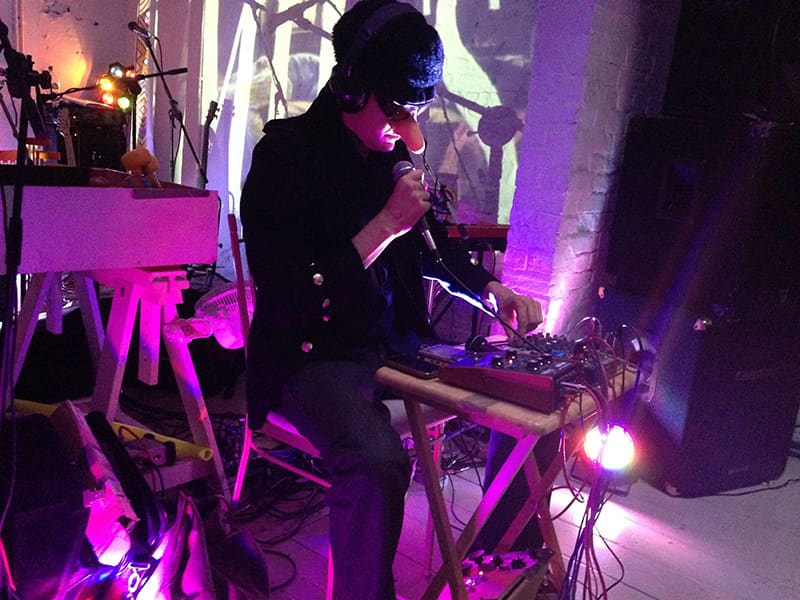 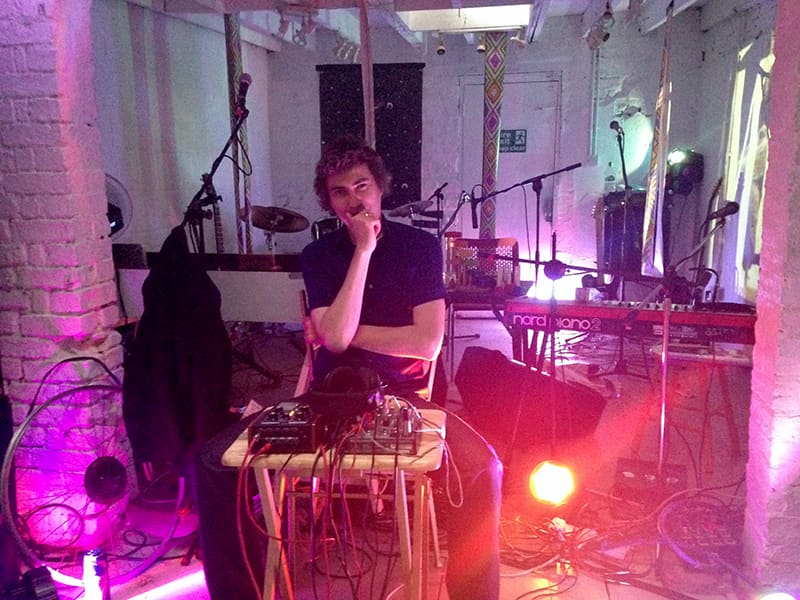 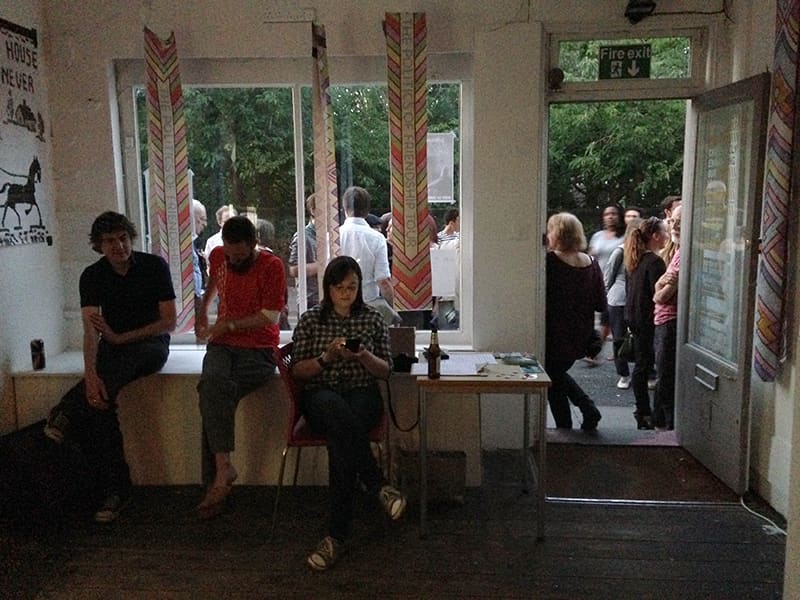 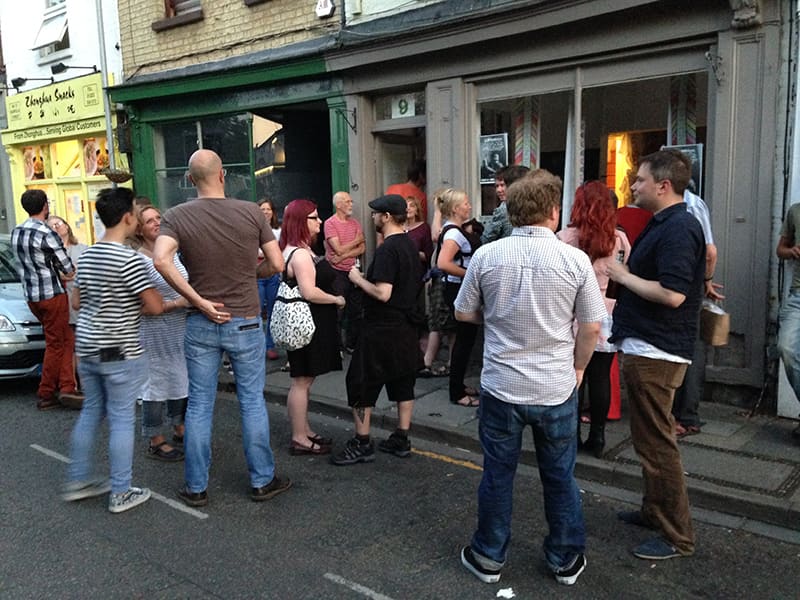