Last week’s return to the RCA reminded me that the rector in my time, Christopher Frayling, wrote several books that I meant to read but didn’t. He’s written about Sergio Leone and the spaghetti western film makers and about science fiction. He made a TV series on Tutankhamun. All very much up my street. I also have a vague memory of a programme he made about the horror genre – Frankenstein, Dracula, Jekyll & Hyde, The Hound of the Baskervilles – where the stories come from and why they still resonate in contemporary culture. This Christmas’ holiday reading will be his book Nightmare: Birth of Horror (out of print but tracked down second hand on Amazon).

I was obsessed with dinosaurs as a child. I knew all the names. I had all manner of books on dinosaurs, dinosaurs figures and Airfix models of Stegosaurus, Tyranosaurus and Triceratops. I clearly remember watching Dr Who from behind the sofa. Also Greek myths like The Labours of Hercules, Theseus and the Minotaur, Perseus and the Gorgon. I loved monster films of the 50’s, 60’s and 70’s with effects by Ray Harryhausen – the Sinbad films, Jason and the Argonauts, King Kong, The Valley of Gwangi. Science fiction took over with Star Wars, Battlestar Gallactica, The Martian Chronicles, Star Trek and Planet of the Apes. Later the Hammer Horror genre with its technicolour blood and heaving bossoms. Also The Wicker Man. I still can’t pass up a late night Hammer Horror or spaghetti western. Modern interpretations too – American Werewolf in London, The Hunger, The Lost Boys, Near Dark, Alien, Blade Runner, The Ring, Blade, Underworld, Van Helsing, Twilight. Looking forward to reading about why horror is such an enduring and popular theme.

This picture of Frayling by Peter Blake now hangs in the senior common room at the RCA. On being awarded a knighthood he chose the motto “PERGE SCELUS MIHI DIEM PERFICIAS”, which translates as: “Proceed, varlet, and let the day be rendered perfect for my benefit”… or as Dirty Harry said it: “Go ahead, punk, make my day”. 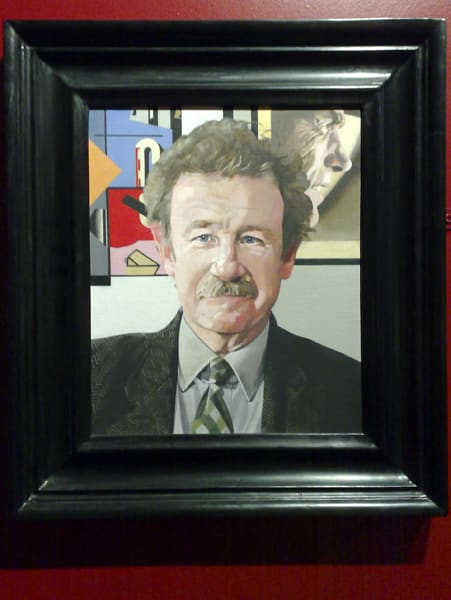